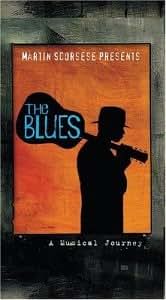 Retrieved from 'https://en.wikipedia.org/w/index.php?title=Martin_Scorsese_Presents_the_Blues:_Jimi_Hendrix&oldid=835922998'
(Redirected from The Blues (film))

The Blues is a 2003 documentaryfilm series produced by Martin Scorsese, dedicated to the history of blues music. In each of the seven episodes, a different director explores a stage in the development of the blues. The series originally aired on PBS (Public Broadcasting Service) in the United States.[1]

Director Martin Scorsese pays tribute to the Delta blues, tracing the roots of the music by traveling through the state of Mississippi with the musician Corey Harris and then traveling to West Africa. Willie King, Taj Mahal, Othar Turner and Ali Farka Touré give performances of early Delta blues songs, along with rare archival film of Son House, Muddy Waters, and John Lee Hooker.

The Soul of a Man[edit]

Warming by the Devil's Fire[edit]

Written and directed by Charles Burnett, this film presents the tale of a young boy traveling to Mississippi to visit relatives. He is caught between the pressures of his religious mother and gospel music, and the eagerness of his blues-loving uncle. The film includes performance by

Director Marc Levin follows Marshall Chess as he remembers his father's contribution to Chicago blues history as the co-founder of Chess Records and his own production of the controversial album Electric Mud. He organizes a reunion of the musicians that made Electric Mud to record new versions of Muddy Waters's blues standard 'Mannish Boy', with contributions by hip hop artists, including Chuck D of Public Enemy, Common & Kyle Jason.

Directed by Mike Figgis, this episode is dedicated to blues culture in Britain and to the effect of the British Invasion on American blues culture. It contains footage from a jam session and interviews with the musicians Jeff Beck, Van Morrison and others.

Directed by Clint Eastwood, this episode is dedicated to blues music played on the piano. Eastwood, a piano player and accomplished composer, interviews such key figures as Dr. John, Ray Charles, Jay McShann (shown on the DVD cover), and Pinetop Perkins.