Guys, The 'L' marking dates this pistol as a later version than the one Frank cited Perhaps the Early Nazi Police model There are several variations of this version but the 'L' seems to make it the early one. To my knowledge they were put into service in both.32 acp and in.380 Auto. These tend to function best with Military ball grade ammo with a round nose bullet,but in sound shooting condition it is suitible for any of the commercial loadings in either caliber.I would put value at approx $400-$500 less without the original magazine.again to my knowledge the magazines carried the serial number at the lower left side.

Makarov serial numbers. This pistol has been in production since 1938 and was made with both steel and alloy frames. They are good solid handguns,but were overshadowed by the Walthers. If you list all the markings EXACTLY as they appear both in wording and format plus the quality of the finish as some versions are held apart by finish. Ok it is the 7.65 mm as stated in the topic title which is 32 ACP. And yes the L under the eagle on the left side by the trigger guard makes it an early police issue pistol.

It has an N under the eagle on the right side by the trigger guard and in the front right side of the barrel. The finish as stated above is aprox.

95% with very little wear. The same is true for the grips. The serial number,762868, also shows it to be an early model. The left front of the barrel also is very readable, Mauser-Werke A. Oberndorf a N. 7.65 mm, With the Mauser logo in front of all this.

Airmirror beta download. Hopefully someday I can find the original magazine. But for now I have one from the same time period but without the matching serial number. I am told that as the war went on they stopped imprinting them with the serial numbers. I also have a very nice holster for this in excellent shape with the nazi logo on the front of it with the initials D.R.G.M. Over some kind of emblem with a couple rifles crossing each other with the letters AKAN on the bottom of the emblem. This all loks embossed into the holster. Vmware workstation serial. Thanks much for the help.

As a point of reference, go to The item 33-54 is a wartime HSc and has the slide markings and style of wood grips of that era. Earlier wartime HSc's lack the three horizontal bars in the middle of the 2nd line of the slide markings (looks nearly like a solid band in the illustration); this space is blank on earlier HSc's. Note that the very earliest HSc's have the grip screw located much lower on the pistol. (Police pistols should be later.) The 'eagle with the letter N' is a German commercial proof mark of the era; all HSc's, commercial, military and police pistols have this mark.

'The serial number,762868, also shows it to be an early model.' None of my references give production years vs. Serial numbers; likely detailed production records, like those for Walthers, were destroyed in the war. The L under the eagle on the left side by the trigger guard makes it an early police issue pistol.' The sight channel should be matted and there should be a lanyard loop milled in the heel of the gripstrap.

WWII GERMAN MAUSER PISTOL MODEL HSC -
The Mauser HSc is a 7.65mm pistol made in Nazi Germany during World War II and post-war. The designation HSc stood for Hahn Selbstspanner ('self-cocking hammer') Pistole, third and final design 'C'. Production was continued in 1945–46 during the French occupation and, later, from 1968 to 1977 by Mauser. It features a semi-exposed hammer, double-action trigger, single-column magazine, and a spring surrounding the barrel.

The full serial number of each pistol is located on the front of the grip frame, just above the magazine. The last three digits of that serial number are located on the bottom of the chamber (stamped) and the flat panel of the slide just under the muzzle (electropenciled).
Production began in late 1940 at serial number 700,000, as an extension of the serial number range of the Mauser Model 1934 pistol, a much more difficult pistol to manufacture. The early pistols have well-made wooden grips, and are highly polished and richly blued. The first 1350 pistols were made for the commercial market and, because of the low positioning of the grip screws, have become known as the 'Low Grip Screw' variety. Approximately half of this initial production was purchased by the German Navy (Kriegsmarine). All these early low grip pistols are today very rare. At approximately serial number 701345 the grip screws were relocated upward to a more central and sturdier position. 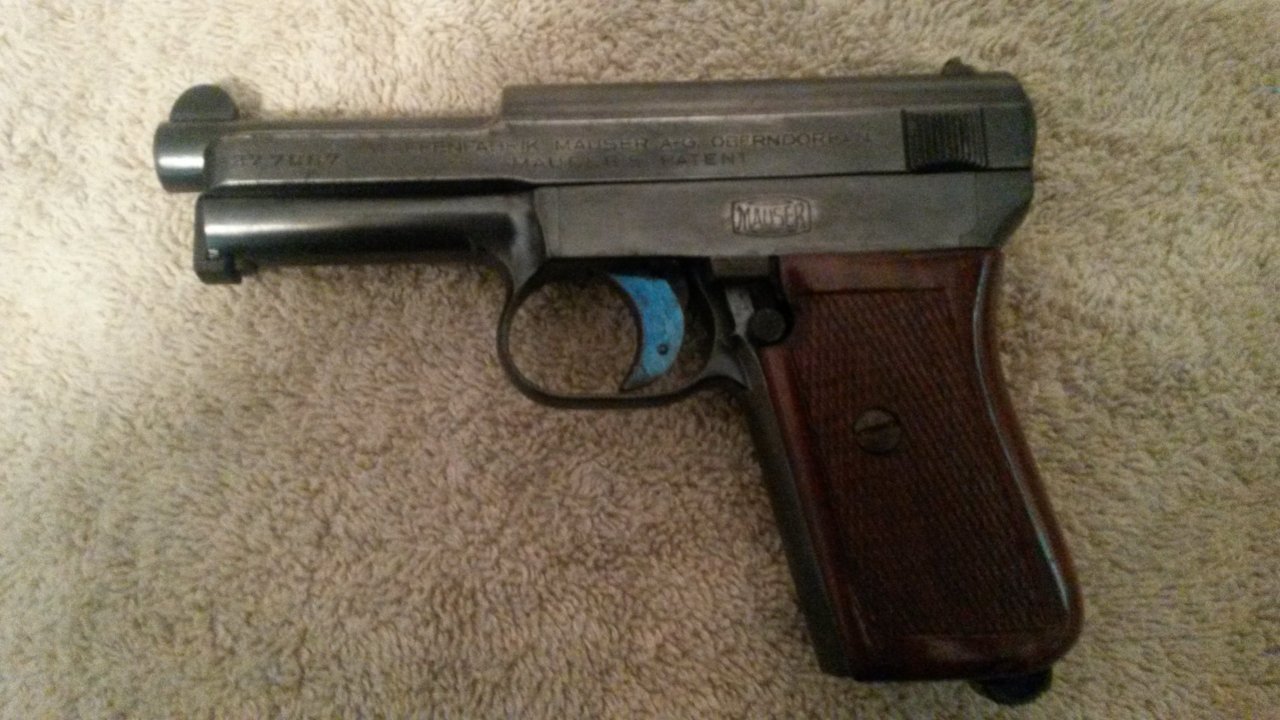 The holster is made of brown leather. It has a separate pouch which holds a single magazine. A leather flap is placed on the lower section and hooks to a metal stud found on the flap. This secures the pistol in place when holstered.
The inside of the flap has the words 'Mauser 7.65' stamped with black ink.

Military personnel of all ranks not issued sidearms often purchased HSc pistols in the commercial marketplace and carried them in the field. Such commercial pistols often returned with veterans as World War II war souvenirs, often in military proofed HSc holsters.