The ciphers command converts textual OpenSSL cipher lists into ordered SSL cipher preference lists. It can be used as a test tool to determine the appropriate cipherlist.

Only list supported ciphers: those consistent with the security level, and minimum and maximum protocol version. This is closer to the actual cipher list an application will support.

PSK and SRP ciphers are not enabled by default: they require or to enable them.

It also does not change the default list of supported signature algorithms.

On a server the list of supported ciphers might also exclude other ciphers depending on the configured certificates and presence of DH parameters.

If this option is not used then all ciphers that match the cipherlist will be listed.

When combined with includes cipher suites which require PSK.

When combined with includes cipher suites which require SRP.

Verbose output: For each cipher suite, list details as provided by .

Like , but include the official cipher suite values in hex.

In combination with the option, list the ciphers which could be used if the specified protocol were negotiated. Note that not all protocols and flags may be available, depending on how OpenSSL was built.

Precede each cipher suite by its standard name.

Convert a standard cipher name to its OpenSSL name.

The cipher list consists of one or more cipher strings separated by colons. Commas or spaces are also acceptable separators but colons are normally used.

It can consist of a single cipher suite such as RC4-SHA.

Lists of cipher suites can be combined in a single cipher string using the + character. This is used as a logical and operation. For example SHA1+DES represents all cipher suites containing the SHA1 and the DES algorithms.

Each cipher string can be optionally preceded by the characters !, - or +.

If ! is used then the ciphers are permanently deleted from the list. The ciphers deleted can never reappear in the list even if they are explicitly stated.

If is used then the ciphers are deleted from the list, but some or all of the ciphers can be added again by later options.

If + is used then the ciphers are moved to the end of the list. This option doesn't add any new ciphers it just moves matching existing ones.

If none of these characters is present then the string is just interpreted as a list of ciphers to be appended to the current preference list. If the list includes any ciphers already present they will be ignored: that is they will not moved to the end of the list.

The cipher string @STRENGTH can be used at any point to sort the current cipher list in order of encryption algorithm key length.

The cipher string @SECLEVEL=n can be used at any point to set the security level to n, which should be a number between zero and five, inclusive. See for a description of what each level means.

The cipher list can be prefixed with the DEFAULT keyword, which enables the default cipher list as defined below. Unlike cipher strings, this prefix may not be combined with other strings using + character. For example, DEFAULT+DES is not valid.

The following is a list of all permitted cipher strings and their meanings.

The ciphers included in ALL, but not enabled by default. Currently this includes all RC4 and anonymous ciphers. Note that this rule does not cover eNULL, which is not included by ALL (use COMPLEMENTOFALL if necessary). Note that RC4 based cipher suites are not built into OpenSSL by default (see the enable-weak-ssl-ciphers option to Configure).

All cipher suites except the eNULL ciphers (which must be explicitly enabled if needed). As of OpenSSL 1.0.0, the ALL cipher suites are sensibly ordered by default.

The cipher suites not enabled by ALL, currently eNULL.

'High' encryption cipher suites. This currently means those with key lengths larger than 128 bits, and some cipher suites with 128-bit keys.

The 'NULL' ciphers that is those offering no encryption. Because these offer no encryption at all and are a security risk they are not enabled via either the DEFAULT or ALL cipher strings. Be careful when building cipherlists out of lower-level primitives such as kRSA or aECDSA as these do overlap with the eNULL ciphers. When in doubt, include !eNULL in your cipherlist.

The cipher suites offering no authentication. This is currently the anonymous DH algorithms and anonymous ECDH algorithms. These cipher suites are vulnerable to 'man in the middle' attacks and so their use is discouraged. These are excluded from the DEFAULT ciphers, but included in the ALL ciphers. Be careful when building cipherlists out of lower-level primitives such as kDHE or AES as these do overlap with the aNULL ciphers. When in doubt, include !aNULL in your cipherlist.

Cipher suites using static DH key agreement and DH certificates signed by CAs with RSA and DSS keys or either respectively. All these cipher suites have been removed in OpenSSL 1.1.0. 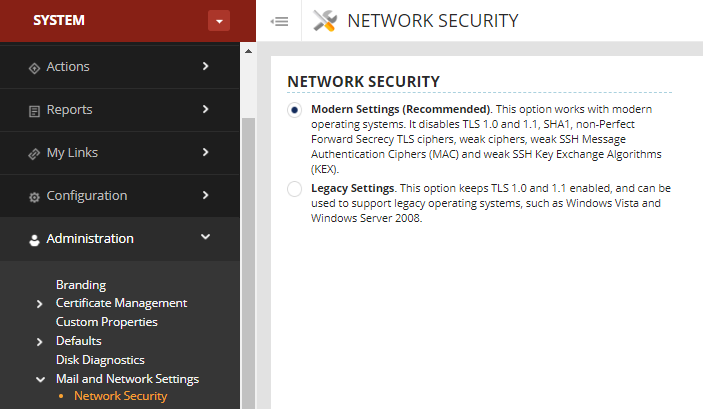 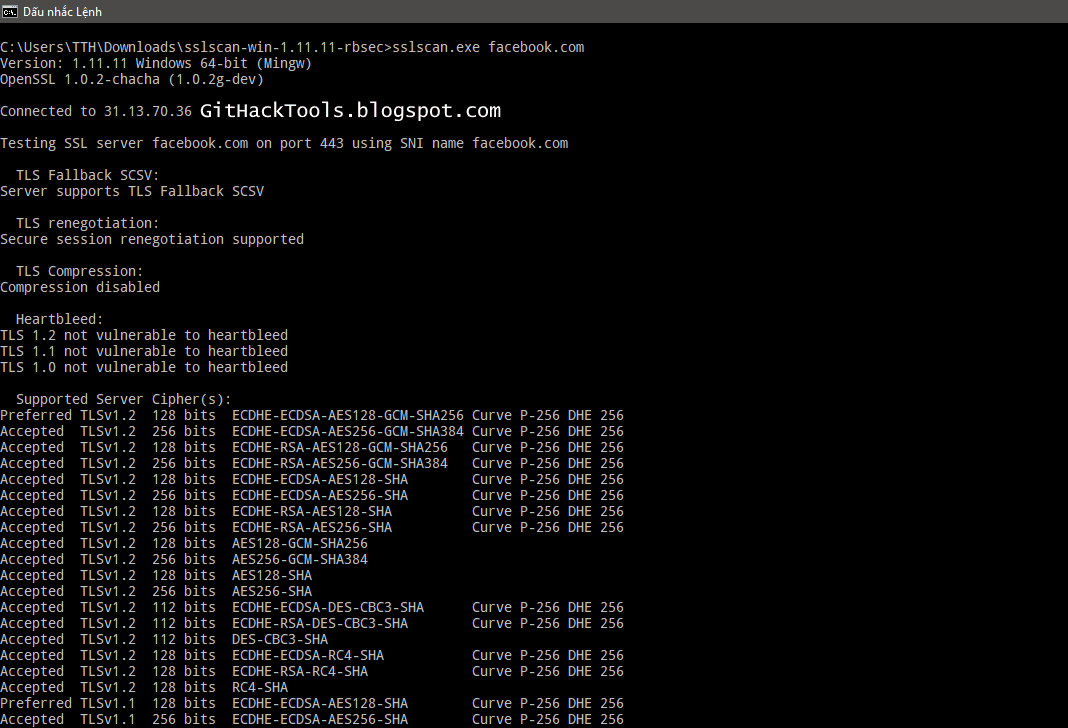 Lists cipher suites which are only supported in at least TLS v1.2, TLS v1.0 or SSL v3.0 respectively. Note: there are no cipher suites specific to TLS v1.1. Since this is only the minimum version, if, for example, TLSv1.0 is negotiated then both TLSv1.0 and SSLv3.0 cipher suites are available.

Note: these cipher strings do not change the negotiated version of SSL or TLS, they only affect the list of available cipher suites.

AES in Galois Counter Mode (GCM): these cipher suites are only supported in TLS v1.2.

Cipher suites using DES (not triple DES). All these cipher suites have been removed in OpenSSL 1.1.0.

Enables suite B mode of operation using 128 (permitting 192 bit mode by peer) 128 bit (not permitting 192 bit by peer) or 192 bit level of security respectively. If used these cipherstrings should appear first in the cipher list and anything after them is ignored. Setting Suite B mode has additional consequences required to comply with RFC6460. In particular the supported signature algorithms is reduced to support only ECDSA and SHA256 or SHA384, only the elliptic curves P-256 and P-384 can be used and only the two suite B compliant cipher suites (ECDHE-ECDSA-AES128-GCM-SHA256 and ECDHE-ECDSA-AES256-GCM-SHA384) are permissible.

The following lists give the SSL or TLS cipher suites names from the relevant specification and their OpenSSL equivalents. It should be noted, that several cipher suite names do not include the authentication used, e.g. DES-CBC3-SHA. In these cases, RSA authentication is used.

Note: these ciphers require an engine which including GOST cryptographic algorithms, such as the ccgost engine, included in the OpenSSL distribution.

Additional Export 1024 and other cipher suites

Note: these ciphers can also be used in SSL v3. 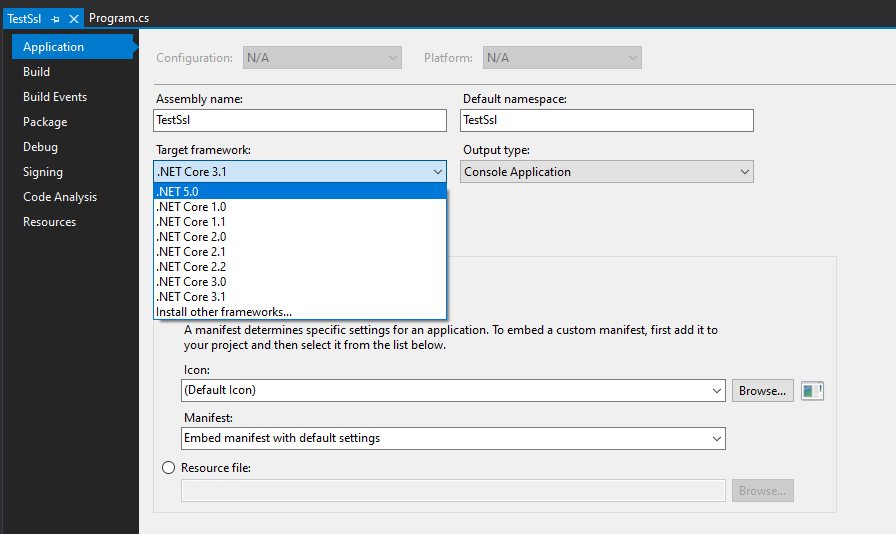 Note: the CBC modes mentioned in this RFC are not supported.

The following names are accepted by older releases:

Some compiled versions of OpenSSL may not include all the ciphers listed here because some ciphers were excluded at compile time.

Verbose listing of all OpenSSL ciphers including NULL ciphers:

Include all ciphers except NULL and anonymous DH then sort by strength:

Include all ciphers except ones with no encryption (eNULL) or no authentication (aNULL):

Include only 3DES ciphers and then place RSA ciphers last:

Include all RC4 ciphers but leave out those without authentication:

Set security level to 2 and display all ciphers consistent with level 2:

The option for the ciphers command was added in OpenSSL 1.0.0.

The is only available if OpenSSL is built with tracing enabled (enable-ssl-trace argument to Configure) before OpenSSL 1.1.1.

Licensed under the OpenSSL license (the 'License'). You may not use this file except in compliance with the License. You can obtain a copy in the file LICENSE in the source distribution or here: OpenSSL.