What's up Youtube peoples!Okay today we're gonna run down the top 5 game mods for Saints Row 4 SO FAR.. And thereason I say SO FAR is because Saints Row 4 has just been released for a little overtwo weeks as of the recording of this video. So if you're watching this sometime monthsfrom now and you're like 'WTF, why is xkfagatron69's Awesome mod not included in this Top 5?'Well that's because xkfagatron69's mod had not been released when this video was made.These are just the best mods that have been released in the last 2 weeks.However, I will try to update this list with a brand-spanking new video as soon as somemore mods have made their way out into the wilds of the internets. So eventually xkfagatron69will get his fully deserved credit. I promise.So alright, let's start the Top 5. And remember- the links to download all of these mods - 100%for free is included in the video description below.First up at #5 on our countdown of the top 5 saints row 4 mods, it's ComradeJK's AnatomicallyCorrect Female Textures. Uhhhh.. aw *** all that it's ComradeJk's NUDE woman mod.Basically this mod removes all the pixelation from your nude female character in the game.And yes I know all the women who subscribe to my channel are gonna be like 'Oh my god,

men are such pigs. Why do you need nudity in the game', and then of course all my malesubscribers are gonna be like 'Oh my god, I'm a PIG! I need nudity in my game'.. Wellat least that's what I said when I installed this mod.Anyway- Now Youtube doesn't allow any nudity- not even cartoony game character nudity, so

I had to censor this video a bit -- but trust me, the character is nude underneath thosecensor bar thingies. She's nude and she's spectacular.Next at #4 on our countdown of the top 5 saints row 4 mods- it's the non-glitching city modby BadMadScientist.Okay, so you know how some of the pedestrians and cars pixelate in Saints Row 4, becauseit's supposed to be like a computer simulation and all that ***? Well okay it's funfor 5 minutes, then all those pixelating people just get kind of annoying. Well, this modREMOVES the pixelated people and cars and just makes them look all normal-like. Nowthe walls and buildings are still all freakified even with this mod, but at least the peopleand cars look right.At #3 it's another mod that is probably mostly for the guys -- but it's the Stockings andLingerie mod by y77117. Um yep y77117.. I dunno, but that what he calls himself.Anyway this mod lets you alter your female players skin to include one of a selectionof almost 40 different styles of sexy stockings and lingerie. You can't really switch betweenthem in the game, so you kinda have to pick your favorite ho clothes for your characterbefore you start the game, but luckily, there's a list of what all the different lingeriestyles look like right on the mod's page. So just pick out some slutty skanky clothesfor your player and then start up the game.At #2 it's the Unlimited Super Powers mod by LeGeNtUs -- at least I think that's howyou say his name. This mod makes it so that your super power meter NEVER runs dry. Youcan throw unlimited freeze balls, unlimited ice, unlimited telekinesis. Just um..wellUNLIMITED everything. It's a VERY fun mod if you just feel like running around town,tearing *** up and being a super-powered bad ***.And finally at #1 on our top5 Saints Row 4 mods -- it's the Additional Cheats mod, bythe godfather of all Saints Row mods - Mister IdolNinja.This mod adds 160 new cheat codes to Saints Row 4. Yes 160!You can unlock all super powers, get any vehicle from the game- like say if you just wannacruise around town in a monster truck for example.Or you can make the residents of the town much more interesting- make them all mascots,make them all pimps and hos, make them all have giant heads, or my favorite- just makethem all *** INSANE- they'll attack you, each other, and everything else in their path.And it's *** chaos.You can also play as tiny little Oompa Loompa or a big Yow Ming looking ***.And ANY weapon from the game that you want to use is just one cheat code away. Seriouslythere is WAY too much stuff in this mod to show it all, so just check it out. It is ridiculouslyfun. So that's the end of our countdown, linksto all of these mods are in the video description below. if you liked the video, please like,favorite, and subscribe for more cool Saints Row stuff. And also, be sure to check outthe NukeNorway Facebook page where I have added links to even more cool mods that youcan try out for yourself. These mods didn't quite make the top 5 , but are still AWESOME.Until next time- Love you Youtube peoples and thanks for watching!

Saints Row: The Third was the last SR title that I truly got to play for a long time.

And it still brings back some fantastic memories of the good old days that I spent in my old room playing on my PS3. I never got to try it out on PC until now, and I must say that I’m pleasantly surprised with most mods and not surprised at all with others. Like the nudity mods that one always has to expect for these games.

In any case, there are some fantastic mods for SR3 that are sure to improve the in-game experience by a bunch.

If you’re keen to play SR: The Third once more, or if you’ve never tried it out and you’re looking to have some fun, this list of mods is going to help you kick things off big.

Most of these mods directly affect gameplay too. I know many people look for mods exactly because of large additions so there’s a decent variety here.

Let’s put it this way: I think there’s a little something here for everyone.

Yep, you guessed what this mod is all about.

It basically changes the way women’s bras look in the game. There’s nothing else to add.

If you’re into stuff like this in your game, check out this mod.

Much like the previous mod, this one also modifies women’s looks in the game. 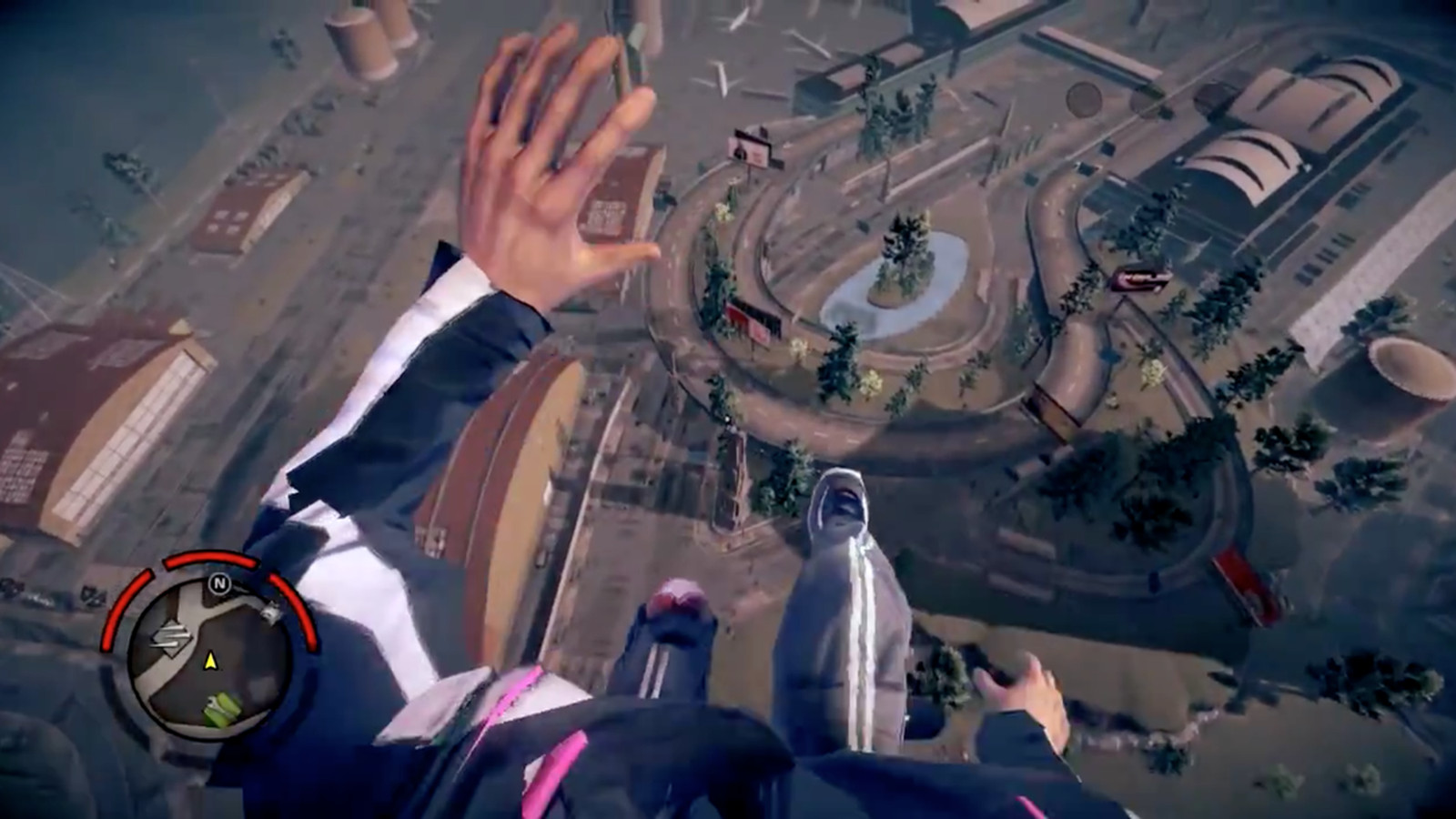 I’m assuming you can already guess what it does by simply reading the title, so I won’t go into details with this one either.

You know what to expect if you decide to follow the link, right?

Our dear friend known by the eloquent name of Shitface has produced one of the best mods in the SR3 community.

This one does a complete rebalance of the weapons system in the game, changing things that range from basic modifications to others that go as far as changing the traces of certain types of ammunition in the game.

In any case, this is a great mod to install regardless of where you are in the game.

If you’ve been playing for a while the changes will be more noticeable. If you haven’t, you’ll get used to the changes quickly.

Especially considering all the fun weapons we have in SR: The Third.

Another mod brought to us by the SR legend known as Shitface, this one does a fantastic job at overhauling the way the AI works and spawns.

It makes spawns way more natural and tweaks the way the AI interacts with the player as well as with the game environment.

Notoriety has been heavily modified and improved to make it work even better than it does in the vanilla game.

The cops are much more fun to run from after you’ve installed this mod. Thanks, Shitface.

8. Things To Do in Steelport

So this is more of a mod pack than a mod per se. But I think it’s important to check it out anyway.

It comes with a family-friendly version as well, which is hilarious to read something like that in a title as violent as Saints Row.

But that just means that there are no nudity mods included.

In any case, this one adds the best mods from this list (plus a couple of other useful ones) that’ll help you get the best out of your time in Steelport.

As simple as this sounds, I like this mod because it gave me access to plenty of rides that were difficult to come by before.

It basically adds new cheats that will allow you to spawn rare vehicles in the game.

And this goes beyond all the really fun cars you can already get in vanilla.

Killbane’s Jet, for example, can be spawned with this mod installed. It lets you access a plenty of unique rides and have a lot more fun.

So this mod brings us a ton of customization options to the table, allowing you to make many more changes to your homies and the way your character looks.

The only downside of it is that the description is in Polish (I think?).

But worry not – since I downloaded it, I can tell you that you can expect lots of good out of it!

This is one of the many community patches that modders have taken the time to create.

And I have to say, they are very good additions to the game world. The Unofficial Patch 1 has the main objective of making the game environment feel more realistic, which some might say is a bit of a bummer, but it does grant you a different SR: The Third experience.

I would only recommend this mod to readers that have completed the game already, though.

A basic mod, but it adds a ton of new customization options to the game. So it gets a good spot on my list for sure.

It simply transfers the hair assets from SR4 to SR3, which gives you the option to put any hairstyle from the newest game into one of your characters in The Third.

It’s a fantastic mod, although quite a simple one. Still worth checking out.

Second life marketplace. This one is an even better modification of the game than the last mod pack on my list, as it only adds some minor changes that improve certain key aspects of Saints Row.

Game improvements are a crucial part of this Overhaul.

But it also comes with a ton of graphic improvements that will enhance the way the game looks by a ton.

All in all, although it’s just a compilation, this mod makes the game look far better than in the vanilla version. And the changes make gameplay even more fun.

If you’ve finished the game already then don’t waste any more time time and download this mod now.

Sandbox mode will give you hours of fun that you can’t even imagine till you check it out.

It lets you tweak almost every single aspect of the game.

Imagine having control of when you want your character to get drunk or dizzy; upgrading weapons in an instant; controlling how much cash you really have without needing to input any codes.

This mod basically allows you to do that and much, much more.

There are just too many new features to include them on a single article. I really want you to check this out to surprise yourself along the way.

So what tops a sandbox mode, you may wonder?

It comes with a sandbox mod plus a first-person mod, better textures, the chance for female officers to spawn, better damage, HD guns, and the list goes on.

It’s basically the last overhaul mod that I told you about… but on steroids.

There are just so many additions that make the game great that you’ll love this mod just by reading its description.

Give it a go – first-person SR3 is more fun than you’d imagine.